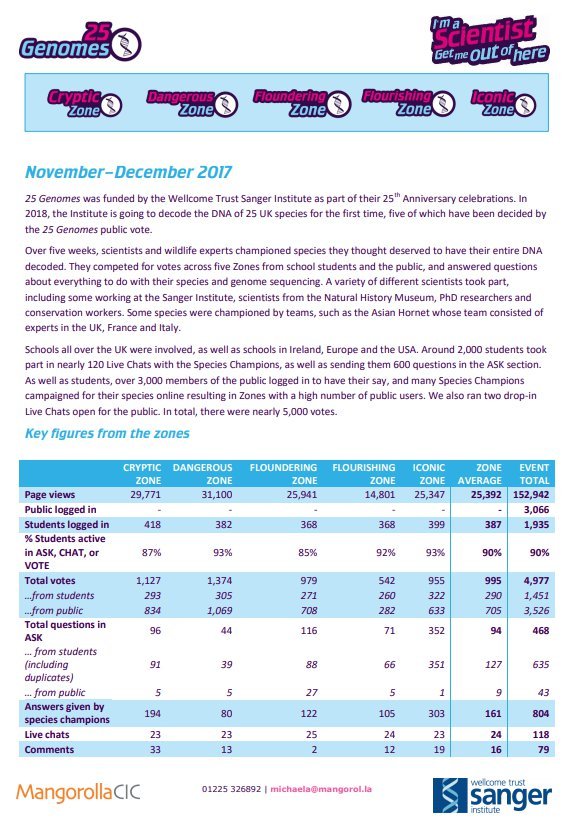 25 Genomes was funded by the Wellcome Trust Sanger Institute as part of their 25th Anniversary celebrations. In 2018, the Institute is going to decode the DNA of 25 UK species for the first time, five of which have been decided by the 25 Genomes public vote.

Over five weeks, scientists and wildlife experts championed species they thought deserved to have their entire DNA decoded. They competed for votes across five Zones from school students and the public, and answered questions about everything to do with their species and genome sequencing. A variety of different scientists took part, including some working at the Sanger Institute, scientists from the Natural History Museum, PhD researchers and conservation workers. Some species were championed by teams, such as the Asian Hornet whose team consisted of experts in the UK, France and Italy.

Schools all over the UK were involved, as well as schools in Ireland, Europe and the USA. Around 2,000 students took part in nearly 120 Live Chats with the Species Champions, as well as sending them 600 questions in the ASK section. As well as students, over 3,000 members of the public logged in to have their say, and many Species Champions campaigned for their species online resulting in Zones with a high number of public users. We also ran two drop-in Live Chats open for the public. In total, there were nearly 5,000 votes.